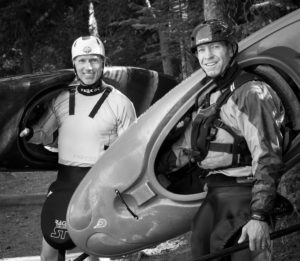 You’ll still be able to find him on the water in Alberta’s Kananaskis Country, perhaps with son Cooper in tow, many years from now

EDMONTON — David Ford will always be up the creek with a paddle.

That he competed in slalom kayak for Canada for three decades was as much a lifestyle choice as an athletic calling.

So you’ll still be able to find him on the water in Alberta’s Kananaskis Country, perhaps with son Cooper in tow, many years from now. He just won’t be looking to make national teams, win medals or secure funding; the fluid components that made his chosen sport both rewarding and frustrating.

At age 50, Ford has officially retired. He went to his final world slalom championships last month in France, mostly to say goodbye.

“Sport is such a funny thing, you know. You spend your life training and always running into these people year after year,” he said. “Then you stop. And there’s a good chance I’m not going to see these guys ever, maybe. It was good to go back, say goodbye and reminisce a bit about the good old days, talk about what other people are going to do next and kind of have some closure.”

The Edmonton native, who now lives in Canmore, retires as the only Canadian to medal at a slalom canoe/kayak world championships, taking an almost unthinkable gold in 1999 and silver four years later. He was the World Cup champ in 2003 as well.

The only significant bauble that eluded him was an Olympic medal.

Slalom was added to the Summer Olympics roster for 1972, but didn’t make another appearance for two decades. That meant Ford, who was born in 1967, was never really paddling toward an Olympic berth as a youngster. He just wanted to be national champion. But when the sport returned for the 1992 Olympics in Barcelona, he was in his prime and ready to contend.

“To kind of accidentally become a top-10 paddler at the exact same time that (kayak returned to the Olympics) was very fortunate for me.”

Ford long thought an Olympic medal would be easier to attain, because the worlds were almost always held in Europe, where local paddlers had home course advantage, while the Olympics skipped around the globe.

But he missed out. He was a career-high fourth in Athens and sixth in Beijing, in his fifth and final Games. Only nine other Canadian athletes have made more Olympic appearances.

The sport changed dramatically when boats were shortened by half a metre after the 2004 Games in Athens. Ford was already 37 then and had been paddling the longer boats for decades. Calgary-born Michael Tayler, who competed for Canada in K1 at the Rio and London Olympics and finished ahead of Ford at the trials for the 2017 worlds, was just 12 in 2004.

“It’s so easy to turn the boats and there’s a whole fleet of kids coming up now who grew up essentially in the shorter boats, so they only know that style of paddling,” said Ford. “I’ve adapted my style and I can do everything they do, but I’m thinking about it, where they’re just out there intuitively slashing and dashing. It’s a very different sport now.

“For me, I was never about the winning at all costs. I always really enjoyed the puzzle of high performance. I really liked the training, trying to be faster every year. I still feel fit, I still test fine in the lab but the sport has changed so much that I have to think about it more than the young guys, who are just doing things intuitively. When you’re thinking, you’re just not able to be as fast. That just said to me, let it go and move on to other things.”

That, and turning 50. That, and having a four-year-old son. That, and his marriage to former alpine skier Kelly VanderBeek, who is ramping up a career in broadcast journalism.

He looks forward to full-time parenting right now and perhaps eventually to mentoring a new generation of athletes.

“If the right coaching situation came up, I would be very keen to take all these things I played with all those years and try to mold some new athletes. The dream would, of course, be to do that in Canada. But right now, my relationship with the Canadian sport system is pretty strained because I fought hard to advocate for different things, so maybe I’d have to go abroad to do that.”

He looks back fondly at the whole of his career, even at having to drum up sponsorship every year, since those sales efforts led to enduring friendships.

“I have no regrets. Living the life that I got to live, it was worth it, 100 per cent. Knowing what I know now, I would definitely do it again the same way.”