Hong Kong by the numbers.

Touring Party: 11
Nights on Tour: 6
Days of Rugby: 5 (Rugby Tens on Wed/Thursday and Seven’s Fri/Sat/Sun
Seven’s Matches: 42
Rain (Only when we were at Sevens Lunch!)
Hours of sleep: Not Enough
Tour MVPs: Fergus and Randy for their hospitality and looking after us VERY well.
Special Thank Yous to David McKenzie and Doug Morton for their hosting above and beyond the call of duty…For the Love of the Game.  Much appreciated and noted.

Regrets and There in Spirit
Good Rat (Paul left him at home and he thankfully survived to join us again) and Doug Laird (Doug will come next year!)

Out of Stadium Highlights

Too hard to call but here is a list of many – Boat cruise to Duff Island, Sevens Lunch with Happy Hour(s) at Yacht Club, Dinner at China Club, Harbour cruise ahead of dinner at Hu Tong, Team Foot Massage, Tatum and Taylor’s surprise for me at the Sevens Luncheon and don’t forget the Carbine Club Lunch.

Canada Sevens box…best seat in the house with the best fans!
Mark el Baroudi’s player of the tournament: “That small fast guy from South Africa…I love that guy!”
Team of the tournament: Kenya!
Most Entertaining Team: Fiji (as per usual!!!)
Congrats to Japan for qualifying for next year’s World Series Sevens…Always a team with heart and passion and great to see them back in.

Well my Privateers, What a week it was.  As the World’s leading Rugby Countries descended upon Hong Kong as they have for the past 43 years we arrived with high hopes and big expectations.  We were not let down.  From start to finish we were hosted exceptionally well and we had no hiccups with travel, tummies or tours.  Bad Rat was solo on the tour and sadly fell victim to Lan Kwai Fong meaning he actually got to go on 2 tours…his first and his last! – A brave and noble Rat, Bad Rat is survived by Good Rat and Greg is going to do his best to train a suitable replacement before the next tour.

The main tour started on Wednesday with the Canada Sevens Lunch, which was a fantastic way to kick things off.  The release of the For the Love of the Game Blazers was a hit and a surprise.  We drifted off to the yacht club following lunch for an amazing afternoon and then dinner at the China Club, which was a real treat.

Thursday, we enjoyed a day out at the 10’s before heading for our team foot massage.  With dinner planned at Hu Tong, we headed out for and afternoon cruise on Fergus and Randy’s beautiful boat. We were joined at dinner by Adam Janikowski and his Wife Mary Beth and her Sister and Brother-in-law and enjoyed some great food and an amazing laser light show of the Hong Kong skyline.  We took the Star Ferry back from Kowloon and got ready for the Sevens to kick off the next day.

Friday was a great surprise in that we had tickets to the Carbine Club and enjoyed the entertaining stories from john Smit and Robert Jones.  It is actually a “Long Lunch” and we finished just in time for the trek up to the Sevens.  Settling into our Seats in the Canada Sevens Fund Rugby Box we sported our “On the Eh Team” shirts and our For the Love of the Game Special Edition Orange Ball Caps. 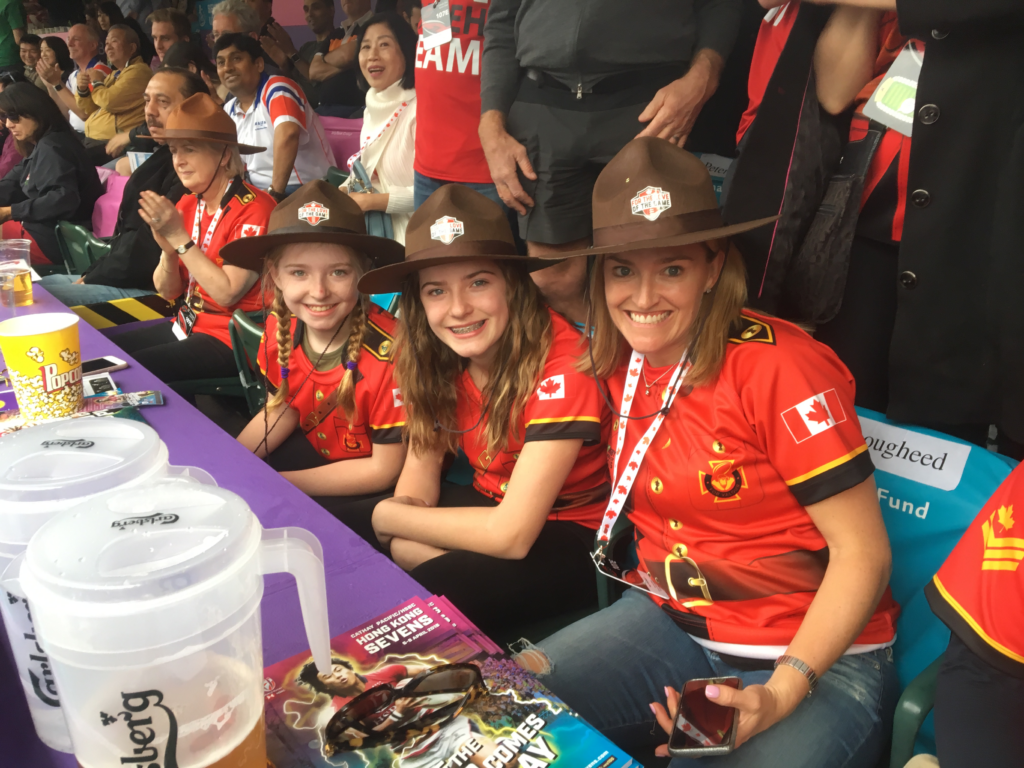 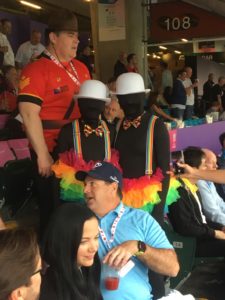 Saturday morning, we arrived at the Stadium in time for Canada’s first game.  Our team uniform was the Mountie Jersey’s and Mountie hats.  Taylor and Tatum were Rainbow Morphs!  Weather was perfect and it was a great day of Rugby.  We finished the day at the stadium with a boat race against our friends in the box behind us.  We won of course!  Leaving the grounds, we headed to Lan Kwai Fong.  By all accounts everyone had a good time but unfortunately we lost our beloved Bad Rat who never made it out.

Sunday morning, we again made our way along the 600m walk to the stadium from our hotel.  Mark elBaroudi and Gregg Jardine had the good fortune of meeting Wasaile Serevi (AKA the greatest seven’s player of all time).  Unfortunately, Canada was out of the hunt for the Top 8 but the day didn’t disappoint with a re-match of the Vancouver Sevens final of Fiji v Kenya.

We finished off the day enjoying a final few drinks in the Box and letting the Stadium clear out.  We then headed to the Hong Kong Football Club for dinner to wrap up an amazing week.

For the Love of the Game Rugby Day Edmonton Road Trip

For the Love of the Game Rugby Day